Who is Klaus Schwab?

Klaus Schwab has openly stated his plans to MICROCHIP people’s skin and brains.

In 2016, Klaus Schwab talked about plans to “microchip clothes first, then skin, then brains, in 10 years” https://t.co/FZnd5oVI7M

Schwab’s TOP Advisor, Yuval Noah Harari, believes free will is over and humans do not have a soul or spirit.

Harari is an Israeli public intellectual, historian, transhumanist, and professor.

This is what he thinks of human beings, the human soul, and free will… 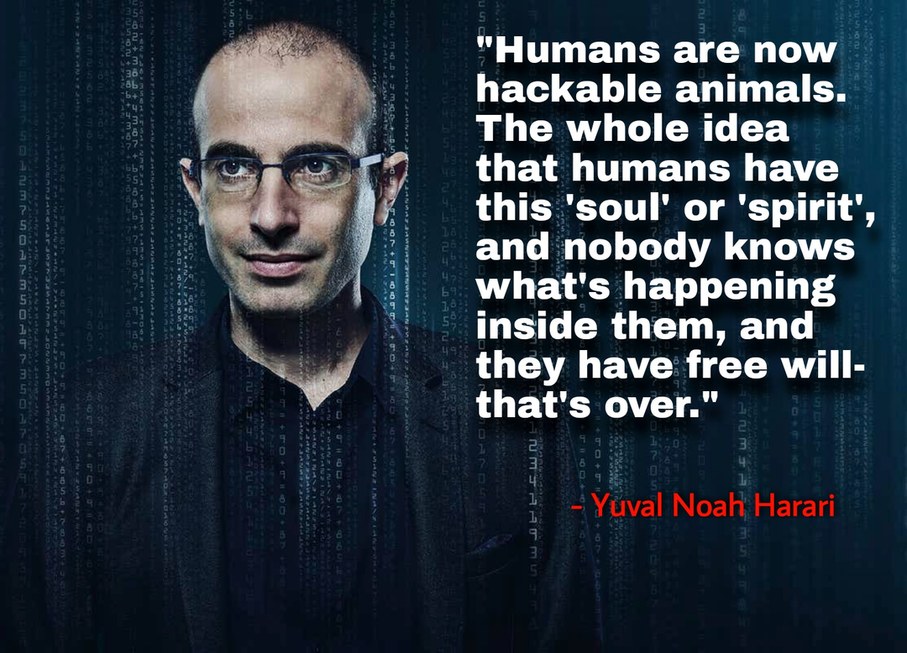 “Humans are now hackable animals. The whole idea that humans have this ‘soul’ or ‘spirit’ and nobody knows what’s happening inside them, and they have free will… That’s over. By hacking organisms, elites may gain the power to re-engineer the future of life itself. Because once you can hack something you can usually engineer it. In the past, many tyrants and governments wanted to do it but nobody understood biology well enough and no one had enough computer power and data to hack millions of people. Neither the gestapo nor the KGB could do it. But soon, at least some corporations and governments will be able to systematically hack all the people,”  says Klaus Schwab’s top advisor, Yuval Noah Harari in a speech from 2019.

"Humans Are Now Hackable Animals. People Could Look Back In A Hundred Years And Identify The Coronavirus Epidemic As The Moment When A New Regime Of Surveillance Took Over." -Yuval Noah Harari#Transhumanism #Nanobots #Graphene #Vaccine #Biometric #biotech #COVID pic.twitter.com/OOGGzZb1FR

Klaus Schwab is the Founder of the World Economic Forum

Klaus Schwab is the founder and executive chairman of the World Economic Forum, the International Organization for Public-Private Cooperation.

Klaus Schwab was born in Ravensburg, Germany in 1938 to Swiss parents.

Schwab and his parents moved to Germany during the Third Reich in Nazi Germany in order for his father to assume the role of director at Escher Wyss AG.

His family was monitored by the Gestapo and his mother was once arrested for speaking the Swiss-German dialect. Near the end of World War II, his family moved back to Switzerland, but later returned to West Germany. Schwab has always been a German citizen and is the only member of his immediate family without Swiss citizenship. [1]

Schwab pursued degrees while working throughout the 1950s and 1960s. After graduating from high school in Ravensburg in 1957, Schwab earned two degrees from the Swiss Federal Institute of Technology including a doctorate in engineering, two degrees from the University of Fribourg including a doctorate in economics, and a master’s in public administration from Harvard University.

Schwab’s family was monitored by the Gestapo, which in 1944 also interrogated his mother (who was from Zurich) for using a Swiss accent in public.He is a citizen of Germany although he has three Swiss grandparents and two Swiss brothers.[5]

In 1972, he became one of the youngest professors on the faculty of the University of Geneva.

In that book, he argued that the management of a modern enterprise must serve not only shareholders but all stakeholders (die Interessenten), to achieve long-term growth and prosperity.

Schwab has championed the multi-stakeholder concept since the Forum’s inception, and it has become the world’s foremost platform for public and private cooperation.

Under his leadership, the Forum has been a driver for reconciliation efforts in different parts of the world, acting as a catalyst of numerous collaborations and international initiatives. (See the history page for more information).

In 1998, with his wife Hilde, he created the Schwab Foundation for Social Entrepreneurship, which seeks to identify, recognize and disseminate initiatives in social entrepreneurship that have significantly improved people’s lives and have the potential to be replicated on a global scale.

The Foundation supports a network of over 350 social entrepreneurs around the world.

In 2004, with the financial contribution received as part of the Dan David Prize, he established a new foundation: the Forum of Young Global Leaders (for leaders under 40).

Seven years later, in 2011, he created the Global Shapers Community (for potential leaders between the ages of 20 and 30).

The purpose of the two foundations is to integrate young people as a strong voice for the future into global decision-making processes and to encourage their engagement in concrete projects that address social problems.

Schwab has encouraged the establishment of communities providing global expertise and knowledge for problem-solving.

Among them is the Network of Global Future Councils, the world’s foremost interdisciplinary knowledge network dedicated to promoting innovative thinking on the future

The World Economic Forum employs over 700 people, with its headquarters in Geneva, Switzerland, and additional offices in New York, San Francisco, Beijing and Tokyo.

Schwab has Been Knighted by Queen Elizabeth

He was also knighted by Queen Elizabeth II – Knight Commander of the Order of Saint Michael and Saint George (KCMG).

During the course of his wide-ranging career, Schwab has received numerous honors.

He holds 17 honorary doctorates, and national medals of honor, including the Grand Cordon of the Order of the Rising Sun of Japan, the Grand Cross with Star of the National Order of Germany and the Knight of the Légion d’Honneur of France.

Outside his work, he has a broad range of academic, cultural, and public service interests.

He is a regular swimmer, mountain walker and an enthusiastic participant in the Engadin Ski Marathon. Klaus and Hilde married in 1971.

They have two children and two grandchildren.

Why do you think the mainstream media is not covering Klaus Schwab, the World Economic Forum, or Yuval Noah Harari?